At milepost 15.5 of the Natchez Trace is Mount Locust, one of the oldest structures in the state of Mississippi. This is also the last of more than 50 Inns that existed during the period of greatest use of the Old Natchez Trace, 1785-1830. It functioned both as an Inn for weary travelers and as a working plantation.

In the woods behind the Inn is the old slave cemetery, a sign lists the names of the slaves buried there. There’s also a short walking trail with interpretive signs that brings you around the rest of the plantation site. 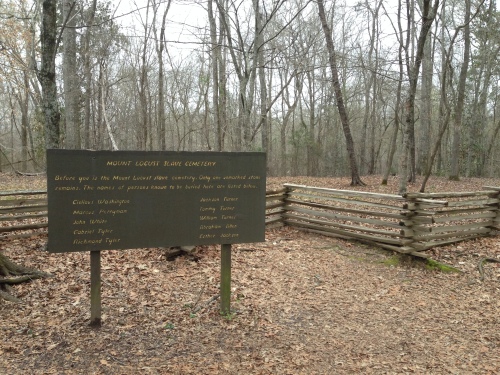 There are still sections of the Old Trace Trail that have been preserved. Some areas of the trail have sunken due to years of travel and erosion. 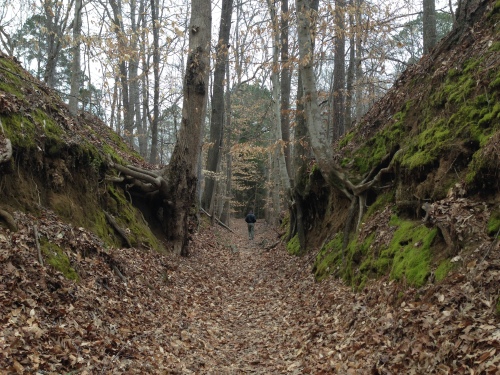 There are many points of interest along the Trace. We stop at most of them. There’s not always something to see, sometimes just a trail head or a field where a significant building used to be, or perhaps a Civil War battlefield.

At milepost 54.8 is the old townsite of Rocky Springs. This used to be a vibrant community of about 2,616 people, but now population is zero because the spring for which the town was named had dried up, then there was the Civil War, yellow fever, destructive crop insects, and poor land management. Now all that’s left is a church and cemetery, a few rusting safes and several abandoned cisterns. A self-guided trail gives the details. 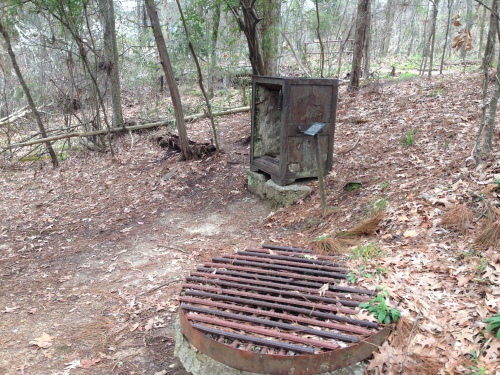 At the Rocky Springs area is one of the few free National Park campgrounds on the Trace. It’s first-come, first-served, and no hook-ups. There are only 20 spots here but only about half were taken. There is also no cell phone service and no internet service. We were able to pick up a few TV channels with our antenna. The temperature dropped to around 37 overnight.

In the morning we continued up the Trace, stopping at more points of interest. There are a few places where there are old Indian mounds.

At milepost 122.0 a trail takes us through a Bald Cypress Swamp.

Milepost 180.7 French Camp. There was an Inn here, and now there is a small community that includes a private school. We stopped at a museum that has several historical old buildings and some sorghum processing equipment. We had some Mississippi Mud cake at the cafe.

Tonight we are at milepost 193.1 Jeff Busby campground. There are 18 spots here and only half occupied. Also free and no hookups, but at least we do have cell service with internet and TV.