The train arrived right on time this morning at the Benson stop, at exactly 8:15 as scheduled. There were about a dozen passengers boarding with us but nobody got off the train at this stop.

We are in Superliner #32091 which was built in 1994. At that time they named the cars after states. And we just happened to get the one named Minnesota!  The state names used to be painted on the outside of the cars but during a later re-paint the states were removed. But we did see the name on the inside door. We feel right at home. 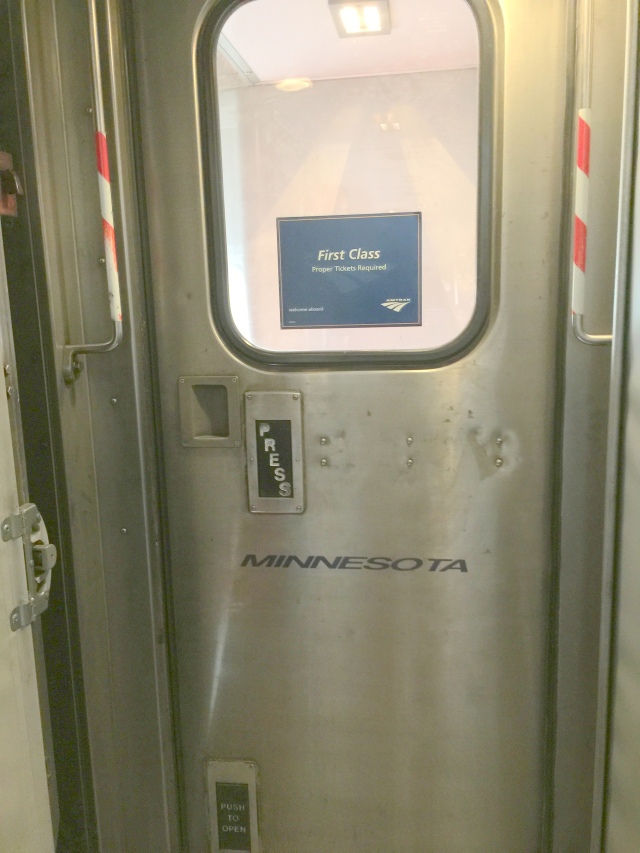 Our bedroom is on the upper level which is cool, so we get good views out the windows.  Here’s Bernie poking his head out into the hallway.

Having lived in the RV for so long we are used to tight quarters. Our room has a bench on one side which will pull out into a bed tonight as well as a top bunk that will drop. And there is a chair facing the other direction. The seats are pretty comfortable.

We have our own bathroom…the sink part is in the room, and the toilet/shower is behind that door behind the sink. It’s the kind of place you might want to back into to get the job done, but I do love that we don’t have to share it with anyone, 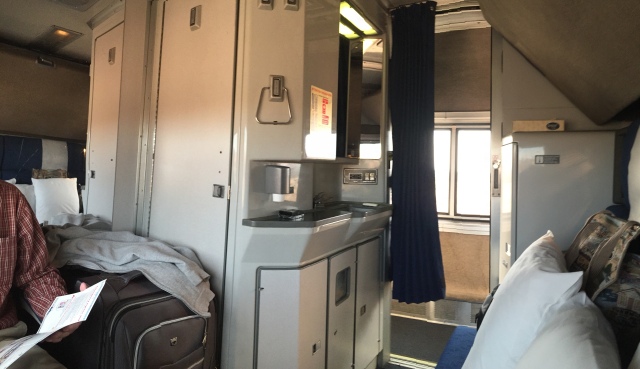 First thing we did was explore the train. There are two engines, pulling one baggage car, then two sleeper cars, then the dining car, then the lounge, and then three coach-class cars and finally the sleeper car that we are in. We are in the very last car.

Right now the train is about 50% full.  The coach seats are very roomy, with loads of leg room. Passengers have brought their blankets and pillows and are sprawled out in all kinds of positions, napping while the train moves. It’s very quiet.

The Sightseer Lounge is cool, with seats facing the windows.

And the dining car. The food is prepared in the lower level and brought up to be served.

If you are not eating in the dining car there is a small cafe in the lower level of the Sightseer Lounge car.

Three meals a day are included in the price of our trip so we will be eating in the dining car. We have heard the food is very good. We shall see. A porter (steward?) stopped by our room to set a 12:30 reservation time for lunch. Today I chose the turkey meatballs and mashed potatoes.  I wouldn’t say it was yummy, but it was ok.

Bernie had the veggie burger, which he liked. 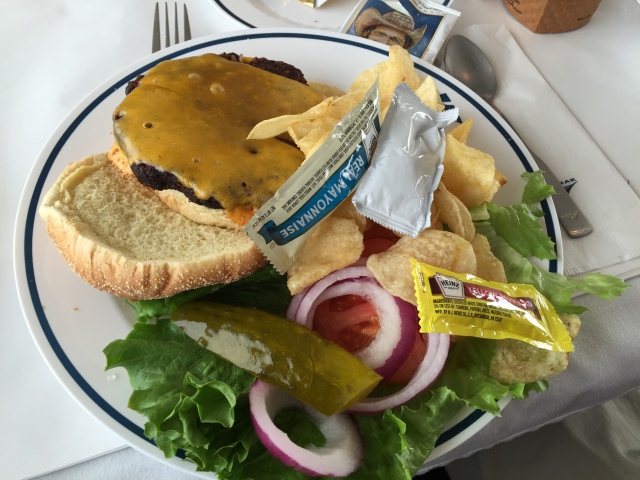 The scenery all day was just the usual desert views that we have been seeing since we got to Arizona. It will improve tomorrow. The most interesting sight we saw was the US/Mexico border fence at El Paso, Texas, and the city of Juarez, Mexico on the other side. 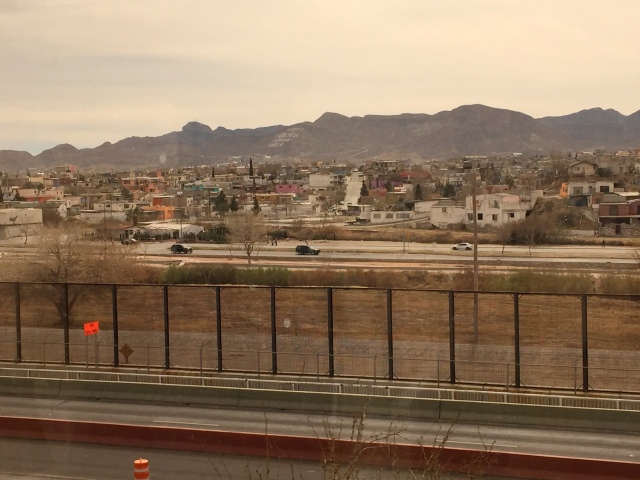 The train stopped at the El Paso train station 28 minutes behind schedule. We were allowed to get off the train and walk around for just under two hours, so we went for a walk. There wasn’t much to see in the immediate area so we returned to the car early. 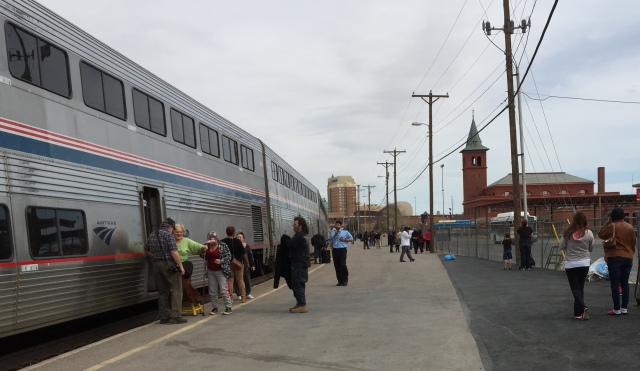 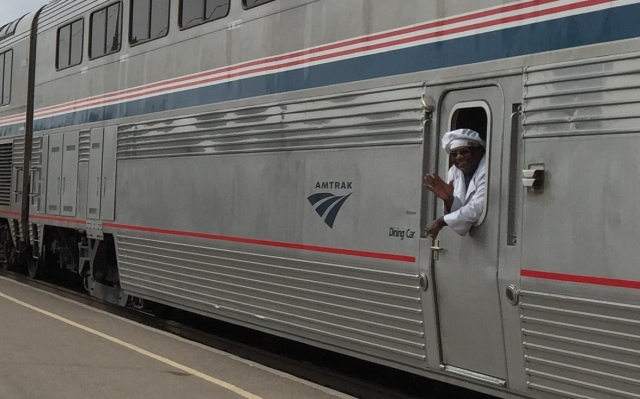 Chef in the Dining Car

We picked up a tumbleweed along the way.

We departed El Paso on time at 3:35 Mountain Time, and continued through the desert further into Texas. And we have now crossed into Central Time Zone!

We had a 5:30 reservation for dinner. Neither of us was really hungry, but hey, our meals are paid for already so we went for it. Still, wanting to eat light, we ordered the top item on the dinner menu and mentioned that we were just going to share it. The chef plated it on two plates for us and this is what we each got:  (and it was delicious) 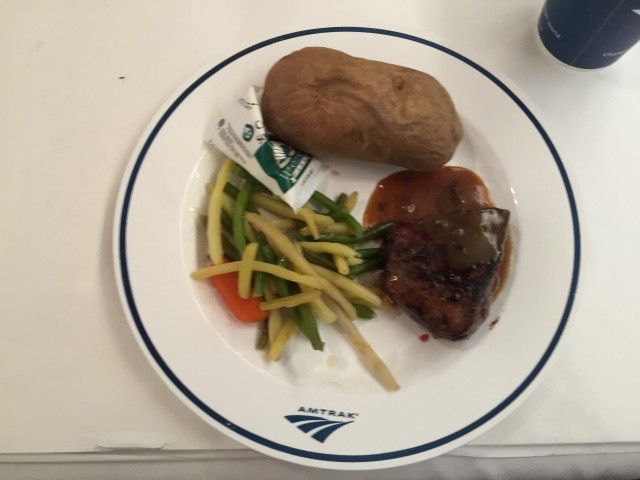 The sun set while we were having dinner so there is nothing to look at now.

We arrived in Alpine, Texas, at 7:58 pm Central Time, 37 minutes early, and have about an hour layover here.

As we ride through Texas we do experience long periods of no cell phone or internet service.