It’s too bad most of our trip on the Auto Train was in the dark. Neither of us slept very well last night and looking out the window to watch the scenery pass was useless. Even though the beds were comfortable enough and our fellow passengers were quiet enough, the rockin’ and rollin’ of the train on the tracks kept us from sleep. It was this way for us last year when we rode the Texas Eagle. The first night was rough, but we slept much better the 2nd night. I guess it takes getting used to. But this trip only has one overnight.

Breakfast began at 6:00AM. It was a light Continental Breakfast with muffins, bagels, cereal, bananas, orange juice and coffee.

When daylight finally arrived we were somewhere near the North Carolina and Virginia border and we got our first sighting of all that snow that Winter Storm Jonah left. 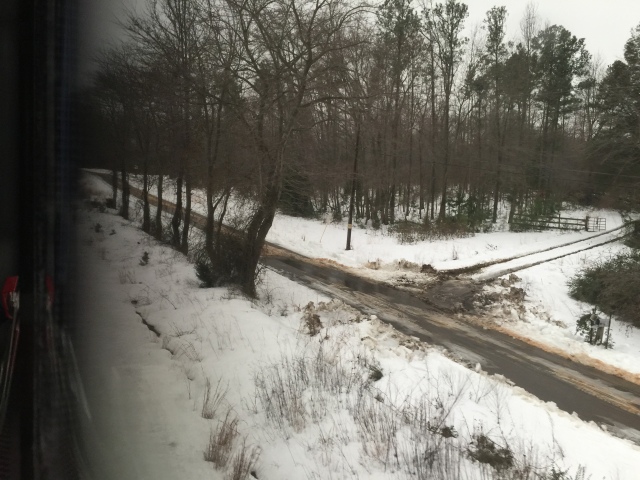 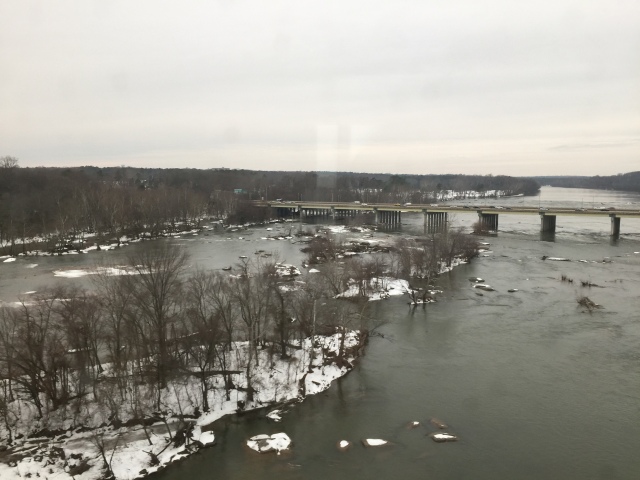 The James River at Richmond, Virginia

Here’s a shot of our train as it passes through Ashland, Virginia. No, I did not get out of the train to shoot this; it was sent to me by the photographer.

It was 38 degrees and the snow was melting down and the major roads were clear.

Our train arrived at the station at 10:23AM, 1 hour and 24 minutes latre due to the “police investigation” event of last night. As we rolled in we could see that a few cars were already waiting to check in for the Auto Train return to Florida. But they have to wait until we’re done.

Notice the fake palm tree by the sign? There were several around the grounds. That’s to get the new passengers in the mood for tropical Florida.

Passengers were unloaded first and wait in the lobby. Then the train was separated in to multi-car segments. Workers drive the automobiles through four or five autoracks before exiting one end and drive a short distance to the pick up area. An announcer calls out the number of the car over the PA with a loud clear voice. The cars exit in rather rapid succession and as the numbers are called you could hear some passengers shout “BINGO”. It was amusing. We waited one hour for our number to be called.

When they call your number you go out the door and your car is right there. It took one hour for them to get to our number. We did a quick look for any damage, and there was none. Then we put our luggage in the car and away we go. It was a pretty smooth process.

The line for the next train was getting longer.

Waiting for the Auto Train

Still looking for all that deep snow we were hearing about in the news. The roads were clean and mostly dry as we drove the loop around Washington DC.

Of course since it was around 40 degrees the snow was melting. But big piles of snow remain in a shopping center parking lots. I had expected to see much much worse. But then we did not have to deal with any unplowed roads in residential areas.

Since we were both tired from lack of sleep last night we didn’t want to drive much so we only got as far as Baltimore, Maryland, and got a hotel room.