After a GREAT visit with our kids and some birthday celebrations with our grandson and with our daughter it was time for us to head back to Florida where we left our motor home. The rest of the winter will be in Florida. In the spring we plan to drive the motor home back up to the New England states to spend some more time with the kids. Too bad we can’t put it up on the Auto Train!

It was a long rough drive around New York City and Washington DC to Lorton, Virginia. Lots of rain and fog and traffic, but we arrived safely at our hotel about 5 miles from the train station. After checking out in the morning we had some hours to kill so we found a shopping mall and hung out there. We arrived at the train station in Lorton  around 1:00PM. There was no line. The attendant at the first booth asked to see our driver licenses and then put a magnet number sign on our car. This time we are #200, which really means nothing as they do not go in numerical order.

Then we pulled up to the unloading area where we took what we wanted for the night and left everything else in the car. This time we just packed an overnight bag and left the big luggage in the car. Then a worker with a camcorder walked around the car and took a pre-trip video.

The cars get processed very quickly and loaded in to the autoracks as fast as they arrive. They are very efficient.

Around 2:30 the announcement was made that we could board the train.

This time of year the trip going south costs a whole lot more than the trip going north. So to save a few hundred bucks we elected for a roomette instead of a full bedroom. This means we have a private room but a shared bathroom is down the hall. There was no room for any luggage, so good thing we left that in the car. There are two seats facing each other. Tonight the sleeping car attendant will lower the two chairs and add a small mattress and bedding to make it into a bed and the upper bunk will be dropped and made up as well. 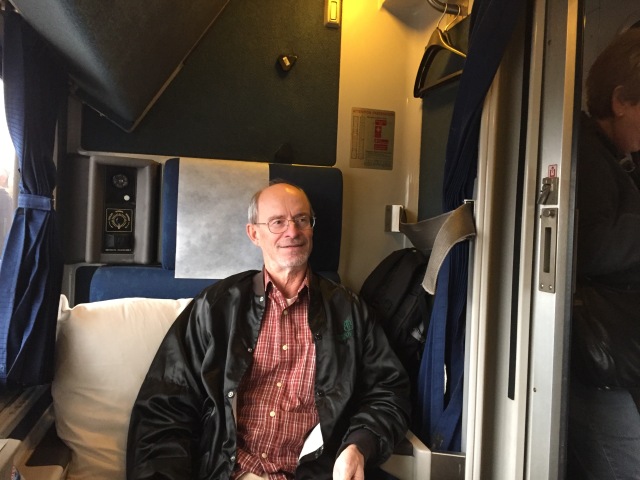 Here is a diagram of the sleeper car we are in. #14 is our room. There are other sleeper cars on this train that have different diagrams. 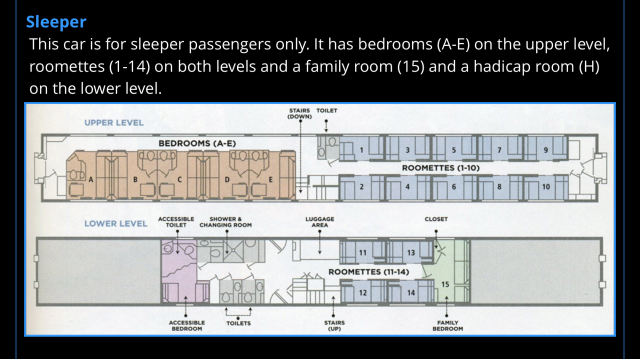 After we were seated we watched out the window as the sections of autoracks were pulled away to be attached to the passenger cars.

While we were waiting for the train to be assembled we went to the lounge car. After a few minutes there it filled with more passengers.

Once all the cars and passengers were aboard and all the train sections assembled we left the station at 3:22 PM, 38 minutes ahead of schedule. Since it’s winter there were only a few hours of daylight and it was still very cloudy. It was 49F. But I was able to catch a few colorless photos before it got dark. A movie will be shown tonight….Mr. Holms. 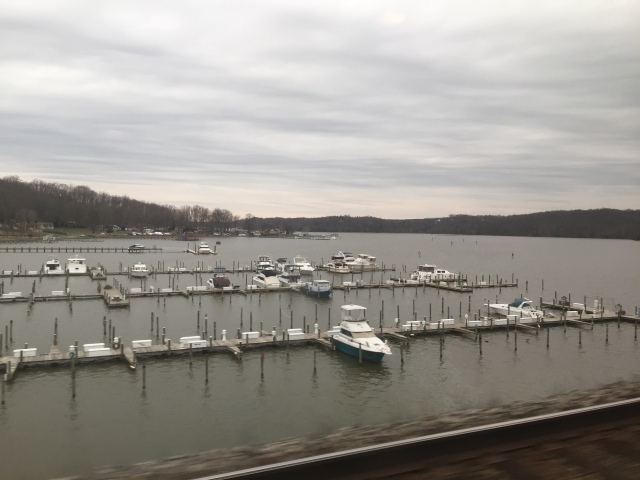 A Marina on the Potomac River 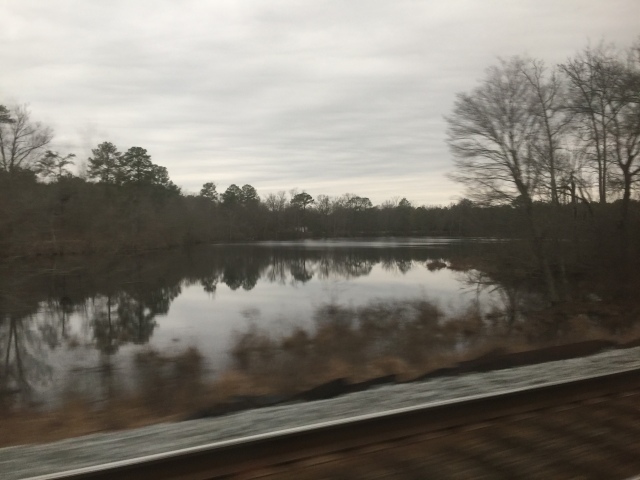 An Unidentified Pond in Virginia

The James River in Richmond, Virginia

For dinner tonight we both chose the Spanish Style Chicken Stew with Andouille sausage & Creamy Polenta. Meals are served with a small salad and a dinner roll. I chose the Tiramisu for dessert and Bernie chose ice cream with strawberry topping. Our table mates were a couple from northern Virginia.